Description: The Southern Toadlet is a small species characterised by its short limbs, fingers and toes. Their body is dark green or brown with an orange patch on their hind legs and throat. They have a black-and-white pattern on their belly. There is also a prominent gland on each hind limb which is usually light brown or orange in colour.

Habitat: They occur in most habitats, including damp areas in sclerophyll (Eucalyptus) forests. In South Australia, the Southern Toadlet is restricted to the lower South East, occurring south along a line from Kingston to Naracoorte, continuing east through Victoria.

Call description: Their call is a harsh, short and slowly repeated grating 'cre-e-ek' from February through June.

Breeding behaviour: Southern Toadlets live in tunnels in the forest during their breeding season from March to May. Male toadlets guard the eggs masses laid by the females. They lay up to 200 eggs which are pigmented, loosely clumped and often coated in soil. Their tadpoles have a dark brown body and clear fins speckled with fine dark flecks. 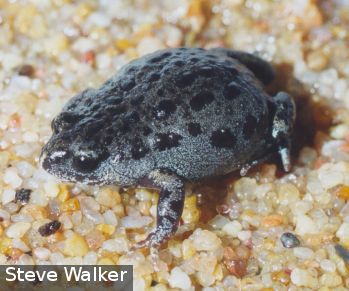