South Australia has relatively few species (or types) of frogs compared to the rest of Australia with only 31 species (two introduced) currently described versus more than 230 Australia wide. 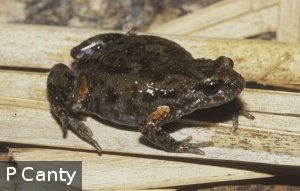 There is still much to be learned about the frogs of South Australia. Two new species were recently described in South Australia: the Everard Ranges Toadlet, Pseudophyrne robinsoni, and the Northern Flinders Ranges Froglet, Crinia flindersensis. There are at least two other species that have yet to be formally described; a tree frog that is currently thought to be Litoria rubella is now believed by some experts to be a different species who are referring to it as Litoria sp. nov. until is is officially described; and a toadlet in the Flinders Ranges referred to as Pseudophyrne sp. nov. There are also species in the remote north of the state that do not have verified sightings but are likely to be here, such as the Desert Spadefoot Toad, Notaden nichollsi.

The dry areas of the state have a surprising diversity of frogs despite the harshness of these environments. There are at least nine species in the North East Region and nine in the North West. It is likely that new species will be described as we collect more survey information and undertake additional research. 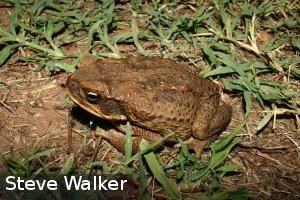 To date Cane Toads have only been found in South Australia as accidental hitch-hikers in produce shipped from northern parts of Australia. There is, however, potential for them to invade during floods down the Cooper Creek or the River Murray. They are highly toxic to any animal that comes in contact with them, so their expansion into South Australia would put at risk birds, mammals, frogs and fishes that co-occur with them. Cane Toads are sometimes mistaken for our native Banjo Frogs so please be sure you have correctly identified a potential Cane Toad invader.

Spotted-thigh Frogs are closely related to the Southern Bell Frog and are similarly cannibalistic. They appear to have become well-established in parts of Eyre Peninsula and there may be a risk through competition or interbreeding with the Southern Bell Frogs (which is nationally considered vulnerable to extinction) should it disperse farther east.