Description: A relatively large frog with a pale raised stripe from below the eye to the top of the front leg. They have a prominent lump on the hind leg (the tibial gland) and a white or mottled belly. There are two subspecies of Limnodynastes dumerilii in South Australia: Limnodynastes dumerilii dumerilii in the Mount Lofty Ranges, Flinders Ranges, Kangaroo Island and Murray Valley, and Limnodynastes dumerilii variegatus in the southeast of the state. The varieties differ slightly in colour: L. dum. dum. commonly has a pale mid- stripe, whereas L. dum. var. has brilliant blue markings in the groin.

Habitat: Occur in a wide range of habitats including urban, heath and sclerophyll forest areas. Burrows in loamy soils and emerges to feed and breed after rains. Commonly seen crossing roads on rainy nights in the Adelaide Hills.

Call description: Its call is a loud 'bonk', very similar to the plucking of a string of a banjo. Sometimes there appears to be two notes, but in reality this is a second frog rapidly responding to the first. Eastern Banjo Frogs have been recorded calling in all months of the year except July, particularly after rain .

Breeding behaviour: Eastern Banjo Frogs burrow in the soil and are sometimes found when people dig in their backyard. Their eggs form a large, white, floating raft in still water. They can be seen in large numbers after rain and under the right conditions mass spawning can occur over just a few days. Females have special flanges (flaps of skin) on their fingers which are used to carry air bubbles from the surface of the water into the foam nest to oxygenate the eggs.

Easily confused with: They are readily distinguished from all other South Australian frogs by the presence of the tibial gland. 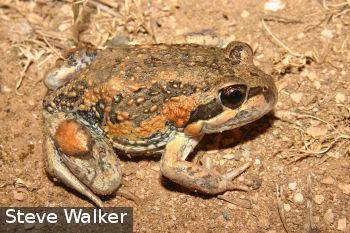 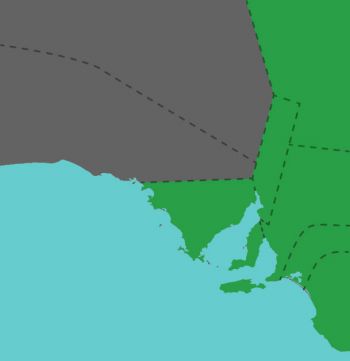