Description: Southern Bell Frog's warty bodies are bright green with golden-coloured patches and large black or brown spots on the back. They typically have a pale green stripe along the middle of their back and their thighs are bright turquoise blue. They have finger and toe pads, which are only slightly wider than their fingers and toes. Their fingers are not webbed, but the toes are almost fully webbed.

Habitat: In South Australia they are found throughout the River Murray and South East in large permanent waterbodies with abundant growth of vegetation near the bank, such as Bool Lagoon. They were once found in the Mt. Lofty Ranges (possibly introduced) but haven't been recorded there since the 1980s.

Conservation status: V (NPWSA) VU (EPBC Act) The Southern Bell Frog was probably introduced into the Onkaparinga river system during the 1960s, but has not been recorded there for some time. Drainage of swamps has reduced the frog's habitat. It is for this reason that it's status is described as vulnerable.

Call description: They can be heard calling in all months of the year except May, June and July. They call when floating in open water. The call is a long, medium pitched, modulated growl, followed by a series of short grunts.

Breeding behaviour: The eggs are pigmented and deposited in a floating raft which later sinks. The tadpoles can grow up to 100 mm long. They are pinkish-grey with yellow fins.

Interesting facts: This species specialises in feeding on other frogs - it is a particularly voracious cannibal! 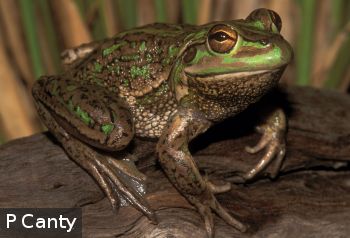 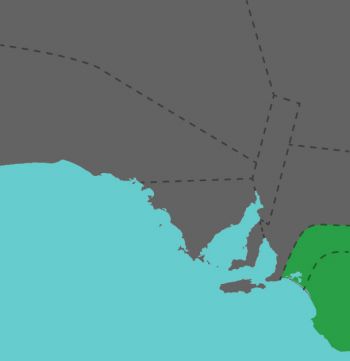